Are Food Riots Indicators of the Collapse of Civilization?

In a detailed article posted to the blog Climate Change and Sustainability, Lester Brown makes some startling claims about the state of the world. He contends,

This troubling situation is unlike any the world has faced before. The challenge is not simply to deal with a temporary rise in grain prices, as in the past, but rather to quickly alter those trends whose cumulative effects collectively threaten the food security that is a hallmark of civilization. If food security cannot be restored quickly, social unrest and political instability will spread and the number of failing states will likely increase dramatically, threatening the very stability of civilization itself.

This dire warning is in part based on the number of alarming food-related incidents that have occurred since September 2007, which have led Mr. Brown to further assert that, “Food riots are now becoming commonplace.” While it is not yet convincing to me these incidents are thus “commonplace,” Mr. Brown does give a reasonably well articulated perspective on the problem in terms of both increasing demand and decreasing supply. A summary of his view is given below.

In systems thinking terms, Mr. Brown is asserting that there is a reinforcing loop that creates an increasing food shortage due to an indefinitely burgeoning population and constrained supply. However—while it is  undeniable that we are currently in a global crisis precipitated by rising costs for food, energy, and core metals—this is an old argument that has suffered many withering criticisms. Thus, any argument for global economic collapse based on rising commodity prices and increasing population has got to address existing positions, some of which have been around since the 1700s. These positions introduce balancing loops to what seems to be a rapidly escalating reinforcing loop. 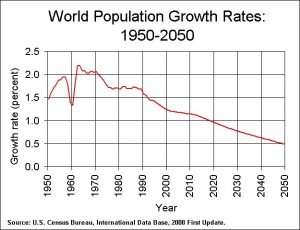 1. In a sharp rebuttal of the Malthusian assertion that increasing wealth inspires greater fertility, the evidence of history is that fertility in wealthier countries approaches near zero and can even become negative. (For example, Russia is facing population decline.) Data and estimates by the U.S. Census Bureau, shown in the graph, show that the global growth rate year over year is declining. Ultimately, world population is expected to ultimately peak and perhaps even drop off a little by 2070. Thus, world population growth is eventually limited as societies reach higher stages of development.

2. As illustrated by Julian Simon’s victorious bet against Paul Erhlich, commodity prices tend to be brought back into line by the market. While there can be dislocation of prices for an extended period of time, and many people can suffer greatly during that time, there will ultimately be an adjustment of the prices downward. In fact, Simon claimed that eventually prices would be lower.

3. Moreover, while population growth is currently outstripping food supply, the Food and Agriculture Organization of the United Nations forecasts that food supply will be more the sufficient by 2030. This suggests that the gap between supply and demand is actually decreasing.

4. Finally, the recent sharp rise commodity prices may significantly related to monetary policy and global commodity speculation. The U.S. Dollar has been falling, and worries about the stock market are thought to have caused a flight of dollars into commodities, driving up the prices of oil and gold in particular. Speculative interest in these products is probably driving up the prices of other agricultural commodities. When other investment opportunities become more favorable again, there could be a dramatic flight out of those speculative positions.

So, while food insecurity is a major problem that needs serious attention, it is stretching the facts to call it the harbinger of the end of civilization or a dire threat that requires the complete transformation of society. Catastrophe theories often assume that present conditions will continue on their current trajectory unabated, when in fact the self-organizing nature of modern society means that humanity is always reacting and adjusting to present conditions.

That said, key organizations and citizens around the world need to take steps to manage the current dislocation of commodities prices. Market mechanisms will likely respond and help bring down the prices as people begin to find alternatives, explore other options, and find ways to improve production. Governmental policy changes and interventions may also be needed. But, in the macro sense, the problem is not likely to engulf the world, although it might threaten weaker governments. As the Foreign Policy blog Passport suggests, wealthier countries can probably weather the turmoil. It is weaker governments, such as those in the Middle East, that are the most at risk. The concern, then, is that those governments will falter, and there could be a subsequent ripple effect to the rest of the world, potentially creating a collapse of the global economy.

2 thoughts on “Are Food Riots Indicators of the Collapse of Civilization?”