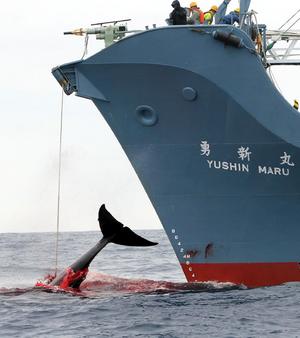 I caught a few episodes of Whale Wars the other day. I was mesmerized by the spectacle:  In the swelling, freezing seas around Antarctica, a rag-tag group of mariners, dressed in black and wearing a logo reminiscent of a Jolly Roger, make foolhardy—and frequently rebuffed—attempts to hamper Japanese whaling research ships. These mariners are animal activists with the Sea Shepherd Society, and they brave storms, injuries, and assorted logistical mishaps like running out of fuel and water to carry forth with this endeavor.  So I asked myself, “What the bleep is going on here?”

The Position of the Sea Shepherds 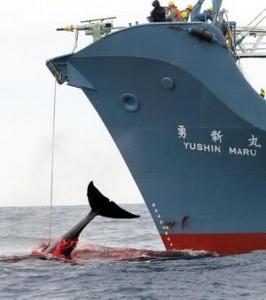 The Sea Shepherds contend that the Japanese whaling research is a government-perpetuated front for commercial whaling in defiance of the global moratorium on whaling established by the International Whaling Commission (IWC). They claim this because the whaling research kills in the range of 500 to 1000 whales per year, and, once the research is done, a significant amount of whale meat obtained from the research is sold to restaurants in Japan.

The IWC is a group of 88 nations, including Japan, who have signed a convention to coordinate with each other for the development and maintenance of sustainable whale stocks. The IWC states,

The International Whaling Commission (IWC) was set up under the International Convention for the Regulation of Whaling which was signed in Washington DC on
2nd December 1946 (Click HERE to view full text). The purpose of the Convention is to provide for the proper conservation of whale stocks and thus make possible the orderly development of the whaling industry

The IWC’s global moratorium on whaling was enacted in the 1985/6 season as a way to preserve whale stocks until proper methods of counting whales and harvesting them could be sustainably implemented.  Subsequent to this moratorium, Japan established the  Institute of Cetacean Research (ICR), which was supposedly created to help gather scientific data to be used for the management of whale stocks. However, a large number of scientists concur with the Sea Shepherd Society that the research conducted by ICR kills whales unnecessarily or is otherwise poorly designed, and, thus, is cover for commercial whaling operations.

The Sea Shepherds further believe that they are justified not only in protesting the whaling but in physically harassing the whaling fleet and attempting to disrupt its operations. They do this by a variety of tactics, including nautical blocking maneuvers, firing fruits with butyric acid, tangling propellers of research vessels with thick ropes, and launching paint at the ships. The Sea Shepherds claim they have the right to take this kind of action on the basis of the UN World Charter for Nature.

The Position of the Institute for Cetacean Research

The  Institute of Cetacean Research states that their goal is to “resume commercial whaling for abundant species on a sustainable basis under international control.   At the same time we are committed to conservation and the protection of endangered species.” The ICR believes that the moratorium on whaling is misinformed and culturally biased. They contend,

Decisions in the IWC should be based on scientific findings, international law and respect for cultural diversity. Consistent application of science-based policy and rule making together with the principle of sustainable use is the paradigm for the management of living resources accepted worldwide. Emotionally based anti-whaling positions calling for an end to all commercial and research whaling irrespective of the abundance of whale stocks are unhelpful in resolving difficult international negotiations and have led to the current dysfunctional nature of the IWC characterized by its institutionalized and polarized rhetoric and confrontational conduct of its meetings.

These are the realities that form the context for discussions concerning Japan’s whale research program in the Antarctic.

Japan’s policy on whaling, its position in the IWC and its whale research programs have been subject of criticism much of which is based on misunderstanding and misinformation.

The ICR further believes that its research programs have contributed significantly to the research database on whale populations, as evidenced by the index to their research articles, spanning many years, on their website. They further contend,

Based on their claims that they are conducting scientific research, ICR considers the activities of of the Sea Shepherds to be dangerous and illegal.

Here’s the way I would break it down.

1. Is the Whaling Research Legitimate? 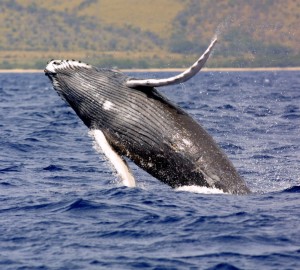 It does look like the ICR is probably a front for commercial whaling.  While the ICR may do some research, the consensus of governments and scientists in general, including the scientific community within the IWC, questions the quality of this research. It is argued that the number of whales killed is too high for the research being done, that non-lethal methods could achieve most of the same research objectives, and that the research has produced little of real value.

As a particular comment on this, I would add that the spirit of a moratorium and protecting and endangered species is to place killing a member of that species under extreme scrutiny and caution. The stated objective of the ICR and the fact that there are so many questions about the number of whales being killed and the apparent dismissal of other non-lethal methods suggests that the ICR is not really placing the killing of whales under extreme caution. So they are not really acting in the spirit of moratorium.

It is further unclear what is really driving Japan’s insistence on whaling. Although they claim that it is a cultural tradition, in fact this is only partly true. Although there has been a long tradition of some whaling in Japan,  the large-scale whaling was only introduced after World War II as a cheap source of protein. Moreover, since the moratorium, the Japanese public seems to be losing its interest in whaling and prefers other meats. Thus, it is claimed that the real impetus behind the Japanese stance on whaling is related to one or more of the following:

The Sea Shepherds are conducting assaults, even though they do not use lethal weapons. That much is clear. While their leader Paul Watson draws the line at the use of deadly weapons,  they are still performing risky nautical maneuvers and aggressive actions that cause property damage and can lead to serious injury or death. For example,

So is this aggressive action justified? The Sea Shepherds claim their legitimacy to conduct assaults is based on the United Nations World Charter for Nature, as explained by their mandate.  The critical part of the mandate seems to be line 21e:

As one can see, the interpretation here of “safeguard” is pretty liberal. However, the Sea Shepherds claim their interpretation has been vindicated by a Canadian courts who invoked the Charter in a decision to drop charges against Paul Watson after an altercation off  Newfoundland.

The problem, though, is one of jurisdiction. That is, who gets to make the decision whether the action is legal or not? The International Whaling Commission is the recognized organization that holds the moratorium, and so it makes sense that they are the ones empowered to make the call.  Despite vigorous internal objection to Japan’s scientific whaling, the IWC lists the Japanese whaling under scientific permits, not under objections. So, officially, the Japanese research is “legal.”  When the Sea shepherds take it into their own hands to decide what is legal and what is not, then they are no different than people rioting after a soccer game, or killing abortion doctors, or breaking into a neighbor’s house on suspicions of illegal activity.

Global society depends on these decision-making processes to maintain justice and fairness.  No one person or small group should be the decide unilaterally, and that correspondingly means that when the players must accept the outcome of the process. If they don’t like the outcome, they need to work within the process to change the outcome. They aren’t justified in taking matters into their own hands. That is the path to anarchy and disorder, not justice and fairness.

3. Results of the Moratorium

From Wikipedia, Whaling in Japan

One aspect that anti-whaling proponents need to realize is that these kinds of bans are complex political decisions. Representatives are accountable to many people and negotiations and compromises have to be made that in some way satisfy the involved stakeholders enough that they will comply. Insisting on absolute positions often leads to no agreement at all.  To understand this, consider the graph at right. The graph shows that Japanese whaling has dropped by at least 60% since the moratorium was fully put in place. Pushing too hard for complete cessation could result in Japan leaving the IWC and, subsequently, their whaling returning to previous levels or higher.

While I strongly suspect that the ICR is probably a cover for commercial whaling, that does not justify placing lives at risk to interrupt their activities, nor does it justify taking matters into one’s own hands, outside the established process.  In particular, it is contradiction for the Sea Shepherd’s to advocate defense of life and then put life  recklessly in danger. It is also a contradiction to support the IWC moratorium on whaling while disregarding the IWC’s dispensation of  Japanese whaling as research.  If individuals or groups do not adhere to the formal agreements and processes that are made, then it unravels the organization of society.

One has to wonder about the real motivations for the daring Antarctic sea exploits of the Sea Shepherds.  Peter Bethune, in one episode, says, in his New Zealand accent, “We’re going to cause mayhem” and “We’re ready for a fight.”  Authentic law enforcement personnel and peacekeepers usually see fighting as undesirable and a last resort. As another indication, the Sea Shepherds dress in black and have an ensign inspired by the Jolly Roger, all reminiscent of illegal activities and adventure seeking. One would think that if the Sea Shepherds were truly acting on behalf of the UN, they would dress in white or fly perhaps a bluish ensign with a whale and globe on it.

In the end, the whole effort seems to smack of a big adventure, and one has to wonder if there are not better, more ethical, safer approaches to stopping whaling.  Conducting whale wars might be good TV, and it might stoke up anti-whaling sentiment in Western nations. But it likely exacerbates the Japanese sense of being pushed around by the world and does nothing to address the root causes of the Japanese interest in whaling.