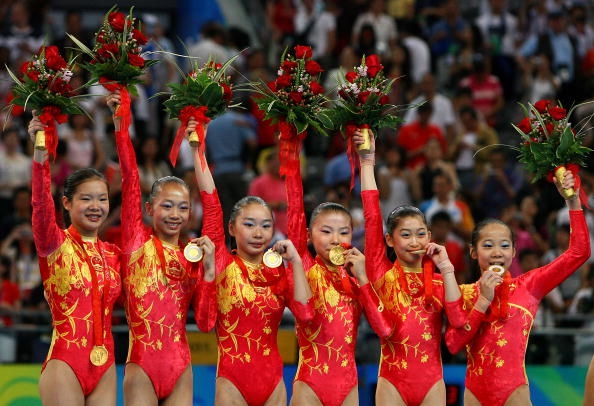 While the controversy over He Kexin and possibly underage Chinese gymnasts at the 2008 Olympics might soon be water under the bridge, to me it is an important indicator of what we can expect from the Chinese government on the world stage. After all, the popular perspective is that they wanted the 2008 Olympics to be just that—a demonstration of their significance in the world.

Before some of you get worked up, we can also acknowledge that other governments, such as the United States, have their fair share of problems. But this post is not about who is better; rather, it about the high probability that not only did the Chinese gymnastic team cheat by using underage competitors, but the Chinese government was involved in provided false documentation for them.

So here is the case against He Kexin, from roughly the most important point to the lowest:

To me, it is pretty clear that her age is really 14, which means that a fraudulent passport was presented to the IOC. I have hard time believing that the team’s coach or even the Chinese gymnastics association would have taken the risk to arrange for a fake passport on their own, so that pretty much implicates the Chinese government.

Part of the strength of a rational case is the failure of other explanations to hold water, so let’s take a look at those:

“If you can’t believe an official document, what can you believe?”

The IOC’s traditional defense has been that the Chinese gymnastics association gave them a passport and that’s the standard of proof. Lu Shanzan, the Chinese coach, says

“Surely it’s not possible that these documents are still not sufficient proof of her birthdate,” he said. “The passports were issued by the Chinese Foreign Ministry. The identity card was issued by China’s Ministry of Public Security. If these valid documents are not enough to clarify this problem, then what will you believe?”

“He Kexin and her parents are indignant.”

Of course they are. They’re indignant because they’re on the hot seat. Everyone accused of a crime acts indignant. This means nothing.

“It was a paperwork error.”

China’s deputy sports minister, Cui Dalin, would like to have you believe its a clerical error.

“Cui Dalin told a press conference that officials transferred He Kexin from a local team to the national team at an inter-city competition last year. He said the discrepancy between He Kexin’s stated age and actual age occurred during the process of registering the move.”

Its starting to sound like they are throwing in the whole kitchen sink here. The problem with this theory is He Kexin’s age was reported as younger not once but many times over the course of approximately 1.5 to 2 years. Moreover, it was reported in public ways. If it was wrong, it would have been noticed and corrected long ago, not suddenly in the 6 months before the Olympics started.

“She actually put her age as younger to compete in a previous event.”

I love this one. The TimesOnline reports a Chinese sportsman as saying

in his youth he had once changed his age to participate in competition with younger players. “It used to be very common, but it is getting less and less so,” he said.

Complaining about the other team when you don’t win is what the Serbians did by filing a protest because their swimmer got beat out by 1/100th of a second by Michael Phelps. In that case, there were cameras everywhere and electronic scoring. There was almost no way it was wrong, and filing the protest just let them avoid realizing they had lost for a little while longer.  But when there is strong evidence of an infraction and an investigation is launched, that is doing due diligence to maintain the rules.

As you can see, the counter arguments are weak. Unfortunately, I fear the IOC is going to act like the Bush administration and delay this until it dies down and then sweep it under the table. But, in the interests of keeping the Olympics going, maybe they won’t. To do that though, they are going to have to get past trusting the “official” documents from the Chinese government. Rather, they need to get some historical documents like birth certificates and grade school reports and submit them to outside forensic analysis to test their age and authenticity.